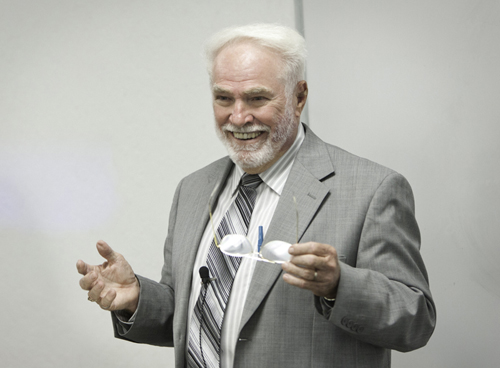 Olivet University's President Dr. William Wagner was invited to speak to volunteers at the Glorieta Conference Center in New Mexico.  Dr. Wagner addressed and thanked the audience for their volunteer work during the summer long youth camps on campus.

The talk drew from Revelations 14:6 in describing Olivet University's mission along with historical references to the German religious reformer Count Nicolas Zinzendorf.

In the verse, an angle is flying midair to proclaim the eternal gospel  to all nations, tribe, language, and people.  Dr. Wagner connected this to Olivet University’s vision to train future leaders in spreading the word of Christ through all fields of study, primarily through Internet technology.

"Today's science allows us to reach further beyond in sharing the gospel to others around the world," said Dr. Wagner.

Dr. Wagner also referenced a small community called Herrnhut, who became an instrumental part in the Christian mission movement.  Started by the bishop of the Moravian Church Nicolas Zinzendorf  in 1722, the village of Herrnhut became a place of refuge for persecuted believers.  The village developed into a community of strong believers who would send off missionaries to the West Indies, northern shores of the Baltic, parts of South America, East Indies,  Egypt, and South Africa.

A native of New Mexico, Dr. Wagner was born and grew up in Albuquerque.  He decided to devote his life to Christ between his sophomore and junior years at the University of New Mexico, took doctorates in theology at the University of South Africa and Fuller Theological Seminary in Pasadena, CA, served as a pastor of Baptist churches in Albuquerque in the 1960s, then became a missionary in Eastern Europe, North Africa and the Mideast.

Dr. Wagner concluded by thanking Glorieta staff and volunteers for their dedication in serving Christ and stewarding the ministry at the conference center.